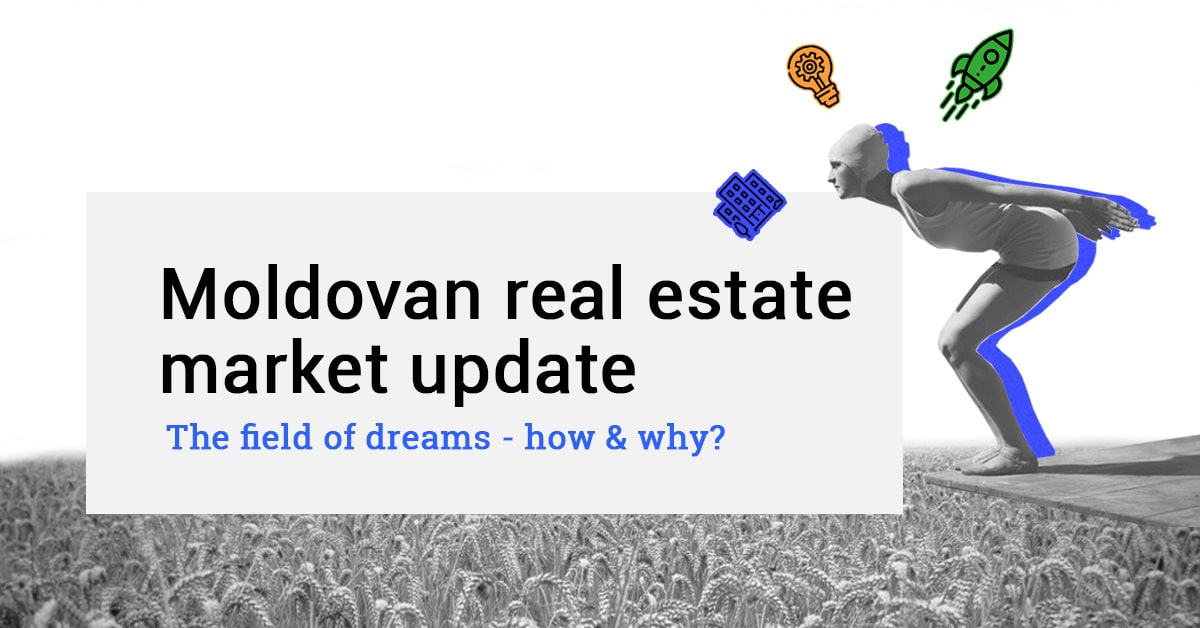 With the international real estate market dwindling, barely surviving the 2020 COVID-19 pandemic, and still very much struggling in 2021, the Moldovan real estate market, the underdog that it is, somehow managed to thrive.

Here is why you should look into investing in Moldovan real estate in 2021 – it’s getting stronger by the day.

People return to their old selves but have clearly reevaluated the worth of almost every aspect of life. You heard it at Reinvest24 first – we are offering – and encouraging – to catch the tidal wave of the respawned Moldovan real estate market.

Don’t get us wrong, it’s not that Moldova hasn’t suffered since the COVID-19 struck – it did, and the economy was hurt pretty bad. It simply is recovering better and more vigilantly than any other market in the EU.

For the real estate market, the pandemic fully ended in June 2021. Consequently, the surge in the number of transactions could already be seen in March and April, but in May, the growth becomes steadier, and by June, it has already surpassed the figures of previous years. This is because the buyers have become as active as they used to be in the pre-crisis period.

But before the said crisis, the market was dwindling slightly – there was no constant to which all the factors adhered. There was a stream of new residents from the suburbs and the villages who wanted to live in apartment buildings. There was a stream of townsmen pouring back into the suburbs. And the majority of the people were renting rather than buying or taking mortgages.

The pandemic had changed the game – since the government enforced the quarantine, all types of individual homes, housing in condos with a large common yard, and apartments with terraces are in mad demand. Many tenants, off-put by the way the landlords tweaked up the prices, turned into homeowners in the matter of half a year.

What type of real estate do Moldovan buyers prefer?

During the pandemic, the demand for individual houses increased by 10%, and more than 440 homes have already been sold in the first half of this year. Compared to 2019, the demand for apartments with balconies\terraces has also increased.

Two years earlier, 29.7 thousand transactions were concluded in 12 months. Meanwhile, only the first quarter of 2021 has seen 7.6 thousand transactions for the apartments purchase in Moldova. If the trend lasts, 2021 will be the year to beat all records in the real estate market, with sales being 30-40% higher.

Individual houses, compared to apartments, balcony or no balcony, cost on average 10% more. And the prices for secondary housing in apartment buildings are falling. This is also due to the change in priorities that arose among buyers after quarantine.

Obviously, a house with a garden is a coveted place during the quarantine, and the secondary living residences are less likely to have a balcony or terrace. In addition, the common yards, which are an advantage for new condominiums, are a flaw in the old buildings. Those yards are typically neglected, and children’s playgrounds are used as parking spaces.

Another flip occurred in the buyer’s family attitudes. In 2000, three- to four-room apartments were popular, and only 9% of apartments had 1 or 2 rooms. In the last couple of decades, Moldovan people longed to have families, children. As a result, most households had three or more people.

After COVID, many people prefer to delay having children until after their 30s, if they decide to have them at all. Many even prefer to stay single altogether, choosing the safety of a secluded life. Not to mention, the divorce rate also spiked in 2020.

This led to smaller apartments rising in demand, leading to the construction of multiple apartment buildings with only one and two-room flats. This is a huge plus for construction companies because these types of projects are easier and safer to develop. At the moment, small-sized apartments make up 83% of all the housing options available on the market, and the living area has decreased from 130 square meters to 60 square meters.

Primary vs. secondary housing in Moldova

Keeping in mind the points from above, the change in the preferences over new and old spaces becomes obvious. Before, most buyers chose primary housing – in 2021, about 35% of buyers acquired new apartments in new buildings, and the remaining 2/3 fancied secondary housing.

Residential real estate in primary markets in Moldova is typically 50% more expensive than the secondary market apartments. Therefore, people with lower income, which are the majority, prefer more affordable housing options. This explains the increased interest in secondary real estate, which is observed in the first half of 2021 – more and more people want to buy, regardless of their budget, to stay secure within their residences.

How did the pandemic reflect on the real estate affordability?

In short – positively. Another evidence of the crisis was the change in costs – in fear of missing out, real estate agencies have dropped the prices, meeting the need of the growing buyers base. In 2008, the square meter in a freshly built apartment was about 900 euros, while the secondary property cost twice as much. During the global crisis of 2008, property prices fell all over the world, and in Moldova, this process took 12 years. Now, a square meter for secondary real estate is in the realm of 500 euros.

Previously, it took up to 40 years for a new family to save enough to buy a living space. In 2021, one can buy an apartment in 15 years (these data are calculated based on the average annual salary, which, according to statistics, is about 5000 euros). Thus, it is now enough time for a person to accumulate the full amount or close the mortgage.

Speaking of which – mortgage conditions have also changed, playing into the affordability factor. Since 2018, the average interest rate below 10% enabled more people to acquire real estate without one’s budget drying out. And the buyers took it gratefully. Among the many favorable factors, there are also various supporting measures that the government has introduced to encourage people to buy housing rather than rent. The Prima Casa program, for example, favors young buyers and offers many privileges, as well as extra-low interest rates (6,63% annually). These measures and the natural shifts of the market led to the overall Moldovan mortgage loan portfolio adding up to 4 million euros.

What are the real estate price dynamics in Moldova?

As mentioned before, during the pandemic year – 2020 – the prices took a dive, but they are recovering well. Reinvest24 covered the situation on the Moldovan market in 2020, so you can see the differences firsthand. Real estate prices in Chisinau increased by 4.2% compared to the fourth quarter of last year. At the moment, the residential property price index (RPPI) is 118.9%. The cost of housing in the primary market grew by 3.8%, while the secondary market grew by 2.2% – just in the last few months.

The price range per square meter in a new building varies from 458 to 905 euros, depending on the city area. The most competitive options are located in neighborhoods like Otovaska, Airport, and Staraya Poshta. The city center, on the other hand, stands out for the highest prices.

The secondary market, known for being pricier throughout the years, is now estimated lower than the primary one. Secondary housing prices are in the range of 368 to 673 euros per square meter. The distribution of prices by neighborhoods is similar to the primary market. The number of rooms in an apartment also affects the cost – the more rooms, the more favorable the price per square meter.

How is the real estate market spread in Moldova?

The majority of real estate purchasing opportunities – hence, the investing ones, too – are concentrated in Chisinau, the capital. We at Reinvest24 have several major projects in the city – which you can invest in – it being a big value city on the European market.

Previously, 40% of housing sales were accounted for in the regions and smaller towns of Moldova, and 60% were in the capital.

Now, 80% of apartments and houses that are offered for sale are in Chisinau. Financial gurus explain this shift with the growing immigration flow from Moldova rather than the pandemic, but the trend has surely grown in the last years. Part of the population leaves the country, while the other part moves from other districts to Chisinau.

For investors and construction companies, this is a blessing. First, the properties in the capital are much easier to control and maintain. Secondly, it already has all the infrastructure for comfortable living, cutting the cost of making commercial spaces from scratch. And finally, since the biggest population flow is centered in Chisinau, any new accommodation will remain in high demand.

So, why is the Moldovan real estate market a field of dreams now?

With all the lack of stability that is now on EU real estate investments markets, the tiny sanctuary of Moldova is – rather unexpectedly – on the rise. We’ve already talked about seven reasons to invest in Moldova, but now it’s even more true – and promises to be much more fruitful. Both the prices and the demand are growing, making it THE market to invest right now, with a sure shot at gaining may more than you give.

We covered the how’s, and now it’s time to answer the why’s:

The Moldovan real estate market had proven its stability and sustainability, coming out on the other side of the pandemic of 2020 stronger than any other. So whether you’re ready to buy a property or want to invest as little as 100 euros in 2021, Moldova is a solid – and resourceful – way to begin.